Welcome to the Paniolo Hall of Fame!

The Paniolo Hall of Fame was initiated by the O`ahu Cattlemen’s Association in 1999 to recognize yesterday’s and today’s paniolo statewide who have contributed to keeping Hawai`i’s paniolo heritage alive, and to honor those who made the paniolo culture legendary.

Now in its 21st year, including our 2019 inductees, there are 157 members, both living and deceased, in the Paniolo Hall of Fame. All of the islands are represented by its members.

All of these paniolo are selected through a nomination process. The Paniolo Hall of Fame mails out the criteria and nomination forms annually. Due to COVID, the PHOF has decided to postpone the 2021 induction to November 2022.  Nominations are now open with a new deadline through Dec 31, 2021.  Any nominations already received will be kept for consideration in early 2022.

The Paniolo Hall of Fame presently consists of photo portraits, short biographies and oral history interviews.  The portrait exhibit has been on display at Honolulu Hale (City Hall), at the Annual Statewide Paniolo Festival, at the Hawaii Cattlemen’s Council annual meeting, at Parker Ranch Museum, the Hawaii State Library and numerous events and venues on all the islands.  It continues to circulate to various locations statewide and may be requested by contacting Paniolo Hall of Fame.  The Paniolo Hall of Fame is on permanent display at the Paniolo Preservation Society’s museum at Pukalani Stables, Waimea Hawaii.

Hawai`i’s surviving paniolo are among a long and colorful chapter in Hawai`i’s history that should be preserved. The Paniolo Hall of Fame Oral History project presently consists of 68 completed interviews with living Paniolo Hall of Fame members. The objective of the interview project is to capture and record the life stories of as many paniolo as possible, before they are lost to future generations.  Contributions from businesses, individuals and foundations make this project possible.

The published interviews are available for purchase, and are also accessible through the Hawai`i State Library System. Go to the Inductees page to view inductee bios and interviews online.

The Paniolo Preservation Society (PPS) was founded in 1998 to increase public awareness of the historical, present-day and future significance of Hawaiʻi’s ranching industry with an emphasis on the roles, traditions, and contributions of the paniolo. We are dedicated to preserving the paniolo tradition as a profound part of the history of Hawaiʻi and the American West. PPS is also committed to perpetuating Hawaiian ranching as a proud and living heritage and contributor to the economic and cultural vitality and diversity of Hawaiʻi. Visit the Paniolo Preservation Society website to learn more!

The Paniolo Hall of Fame is on permanent display at the Paniolo Preservation Society’s museum at Pukalani Stables, Waimea Hawaii. 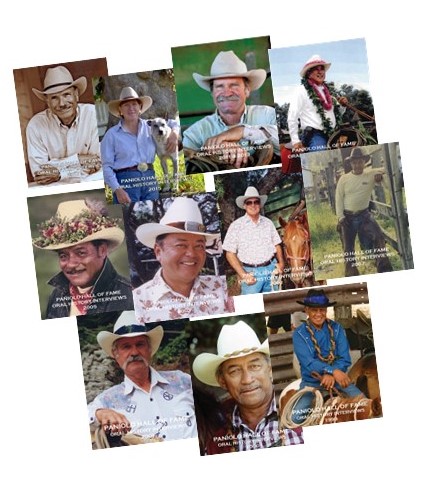