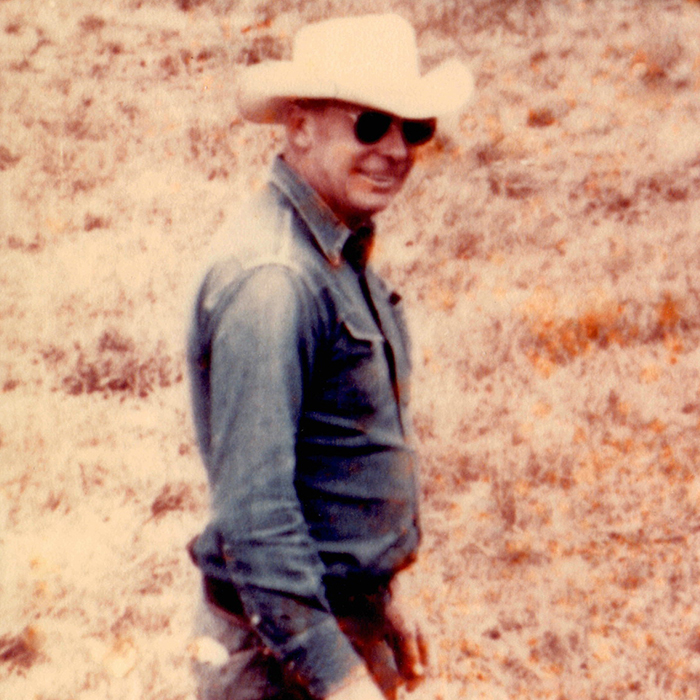 Harold Frederick “Oskie” Rice was raised on his father’s ranch, Ka’ono’ulu, on the slopes of Haleakala, where he became its manager after graduating from high school. In 1955, with brother-inlaw Garfield King, he purchased the ranch, which exists to this day as a general partnership of the Rice and King families.

Oskie Rice grew up driving cattle, hunting and fishing along the shoreline. Vacations were spent with his cousins on long cattle drives, some more than two or three days, roping wild cattle, throw-net fishing and diving for fish and lobsters.

As was the custom in those days, Oskie, along with his cousins Richard “Manduke” Baldwin and Richard “Abe” Waterhouse were sent to school on the East coast at Lawrenceville in New Jersey . Being cowboy kids, they took their kaula ili. Fortunately so, because their dormitory caught fire and they, and the rest of the students, escaped from the second floor by sliding out the window on the rawhide ropes.

Following school, Oskie worked on the family ranch. Polo and golf were also a big part of his life. Oskie and his cousins made up the great Maui Polo teams that came to O’ahu and beat the Dillingham O’ahu team and a team from Midwick, California for an Interisland Championship. In the years following World War II, the Maui team won may games against teams from all over the United States and Australia on Friday nights in the old Honolulu Stadium.

In 1954, Oskie introduced Monkey, the first Santa Gertrudis bull, to Hawai’i. This was the start of crossbreeding the predominately Hereford herds to better utilize the steep, dry pastures on many of the island ranches.

About this time, the Maui Roping Club was founded in Makawao. Oskie gave them land to build an arena, and along with the other Maui ranches, donated stock for their annual 4th of July Rodeo. This rodeo has become the premier rodeo of the year and helped the rodeo as a major sport in Hawai’i. Oskie was a cowboy and sportsman.